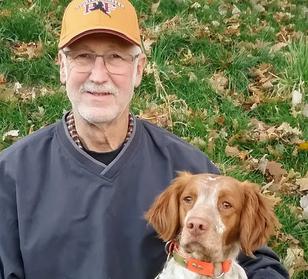 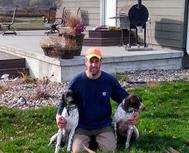 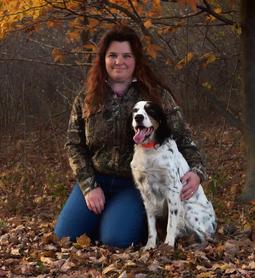 ​​Pam Anderson lives in Cedar Springs with her husband George and 3 Llewellin Setters.  Pam has been employed at Haworth for 20 years and is currently a Commodity Material Planner.   When not at work Pam and George are active in the outdoors.  Hunting, fishing, and trapping are just a few hobbies that keep them busy year round.   When they’re not in the woods hunting grouse and woodcock, their setters Allie, Boone, and Masen enjoy guiding pheasant hunters.

Pam spent over 10 years in 4-H raising and breeding pigs for showmanship, the fair, as well as food on the table.  During high school she actively participated in FFA, the high school band, and a member of the National Honor Society.

Pam raised and bred white shepherds until marrying George in 2007 when their involvement in the Setter world and bird hunting evolved after taking in an English Setter,  Remi.  Remi was an excellent family and field dog.  Shortly after losing Remi to cancer, they took in Llewellin setter, Allie.  George started guiding with Allie while Pam followed along taking pictures throughout the hunts.  Pam decided to also start guiding and added Boone to the canine family.  Their passion for bird hunting and setters continue to grow and have added a 3rd Llewellin Masen.

John Spaans is from Cedar Springs, MI, where he lives with his wife Amber, one year old daughter Mya, and cat Snoop. He spent almost 10 years as an electrician but recently began his own trucking business, Spaans Trucking LLC. He stays busy hauling livestock feed commodities throughout MI, IL, IN, and OH. In his spare time John enjoys salmon fishing on Lake Michigan, shooting at the gun club, and vacations to Beaver Island with Amber and Mya. He also takes annual trips to South Dakota to pheasant hunt with his dad, brother, uncle, and cousins. He really enjoys pheasant hunting and is looking forward to this October!
John has been involved with PF for the past few years. He began by volunteering at and supporting the yearly Banquet, and now will be assisting with annual seed orders and distribution. 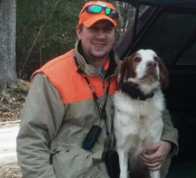 Cheryl Loy lives in Canadian Lakes, MI with husband John Loy and two dogs, Zoey and Matti. I have two children Scott, lives in San Diego, CA and Jillian lives in Allendale, MI.  I have worked for Verizon Wireless for over 20 years. I had attended a couple of  PF banquets and signed up to volunteer as secretary for a couple of meetings 3-4 years ago, and just keep volunteering for more and more things.  Besides being the banquet chair I am now the webmaster, all of it is an adventure.

This year I attended a pheasant hunt for women who have not hunted before by the DNR, it was an exciting day.  I now understand exactly what type of cover the pheasant need to survive. Which is what Pheasants Forever is all about.  I also attended a kids shoot in the summer in Sparta which was a lot of fun too.

​Dan Banister lives in Grandville and loves living in Michigan.  Dan and Jody have been married for 7 years.  Dan enjoys his time with Step-sons Ethan (17) and Owen (15).  Dan and Jody together have been blessed with Peter who turned 6 this September.  Aside from hunting Michigan pheasants (bucket list to shoot and mount a wild Michigan bird!) I make an annual trip to South Dakota with family for a week of hunting pheasants with my beloved German Short-hairs Lily and Ruby.  My passion is pheasant hunting over the dogs but also love my unguided elk bow hunting in Idaho (which stopped when I got married).  I also love our Michigan deer, bear, and grouse hunting along with taking Peter fishing.  I love the beautiful creation we enjoy daily and volunteer to help protect and enhance as we can.  Dan is currently a stay at home dad, who never stays home, and manages several income properties with Peter.  I am able to stretch my wings a bit now, as Peter started full time kindergarten this fall.  I have been involved in our local chapter for about 11 years and recently nominated as President.  I love the fact that our committee enjoys our friendships above the service.  Contact: djbanister@gmail.com or 616-291-0140

​​​​​​​​​I am married to Cheryl Loy, 10 years in Feb 2017 and lived in Jenison, Ottawa County for 10 years where I got involved as Treasurer for the Grand Valley Chapter PF 6 years ago.  Since that time, I have moved to Canadian Lakes, Mecosta County and I am still the Treasurer as well as volunteering for the Youth Hunts, Shoots, and annual Banquet set up and planning. I enjoy the friendships of the Grand Valley Board and the PF members.  I love the PF Banquet, where we have a great time and love to see all of the members winning prizes and bidding on great items.  It’s our biggest fundraiser of the year.

I work for a Global Travel Company in the finance dept, and have been employed there for the past 16 years. Prior to that, I spent 4 years in Upstate New York working for GE in their finance dept. I enjoyed it there spending much as much time as possible in the Adirondack Mountains camping, fishing, snowmobiling, and skiing.

I am an avid fishermen and hunter (Birds and Deer), enjoying the outdoors as much as possible.  I am also kept busy working around my home, renovating and landscaping as much as needed and cut wood for heating our home when I can.

I hope to continue volunteering with PF for a long time, as it gets me involved in a great cause.​

​​Rob Vink and his wife Pam reside in Caledonia with their two sons Micah and Luke. Rob works full time as the Agricultural Technician for the Macatawa Watershed Project. Here he works with farmers to implement management practices to improve water quality in Lake Macatawa.  Rob also owns and operates a taxidermy business from him home working primarily on life size mammals and game heads. Rob has worked in the taxidermy industry for the past 13 years. He had been blessed with the opportunity to work with some of the Grand Rapid’s areas most talented and successful taxidermists. During that time Rob was able to work with and handle a wide variety of trophies from all over the world.  Never taking for granted that he was handling creatures many taxidermist could only dream of.

Rob grew up as a fisherman having not hunted much until moving to Michigan in 2002. During his college days Rob participated in a pheasant hunt with a professor and his dog. It was then that he became hooked on bird hunting and knew that one day he too would chase birds with his own dog.  Rob and Pam traveled to Iowa in 2008 and came back with Brittany puppy named Scooter. This small puppy soon exceeded the Brittany standard tipping the scales around 65lbs. often mistaken for a Setter with a docked tail Scooter runs hard, has a great nose, and is a terrific family dog.  Rob and Scooter have chased pheasants in Iowa and Michigan and make yearly trips to grouse camp in northern Michigan with a group of friends. Aside from bird hunting Rob also enjoys fly fishing, hunting waterfowl and deer in Michigan and has recently began making trips out west to pursue mule deer.

Don, and my wife Marlene, live in Grand Rapids with Dusty our three year old Brittany. We have three adult daughters and two grandsons. I am currently helping with habitat and seed distribution.

I lived on a farm in south central South Dakota till a teenager. This taught me about agriculture, wildlife, dogs and of course pheasants. I still love to get back there to hunt and visit relatives.

Marlene and I operate the Grand Rapids office of Critter Control. We deal with primarily vertebrate pests trying to resolve conflicts. Often this means habitat modification and removal. I have seen how creative animals can be and also how naïve people can be about animals.

I would like to challenge each PF member to invite a guest to their hunting outings. This guest can be a youngster or an older experienced hunter whose friends don’t go out anymore. There are interested hunters-to-be that need to be mentored others re-introduced to hunting. Outdoor people are needed to invest in wildlife habitat.